In order to get this to work we had to make a few changes to Phystrix. The code for this demo can be found here, also check out a screencast of the demo below.

Before we get started, lets recap the example from the previous post. It consists of two internal and one external API: 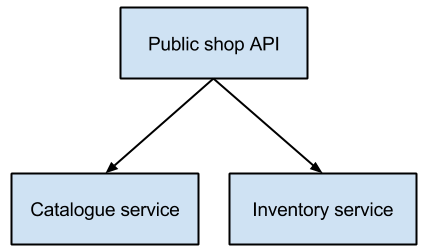 The problem we showed was that by just programming the happy path an error in one of your dependencies can propagate all the way through your application: 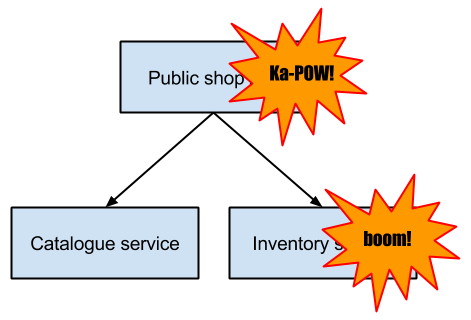 If the Inventory service app is down the Public shop API will also be down. We showed you how to avoid this using the circuit breaker pattern, making the application more fault-tolerant. The next step is to be able to use the circuit breaker pattern for asynchronous calls. In order to get asynchronous calls in php we will use the ReactPHP library. Our demo shows how everything works.

Clone the repository and use composer to install the dependencies:

You can now run the demo - be sure to execute each command in its own terminal.

Both of the commands will show some output. run_all.sh will output the server access logs and the Phystrix command log: 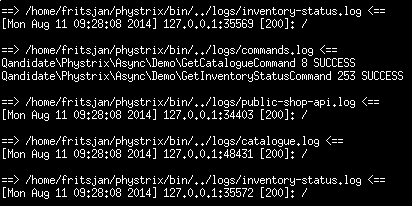 The command log shows that the execution of both the GetCatalogueCommand and the GetInventoryStatusCommand resulted in a successful call. get_catalogue_inventory_status.sh has the following output: 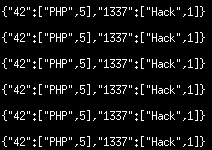 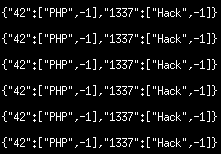 The really interesting part can be found in the command log: 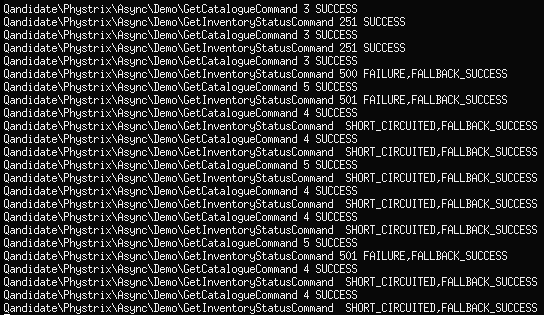 First, a few successes are shown. After this, a failure is triggered for the GetInventoryStatusCommand (due to the timeout). This results in a FAILURE,FALLBACK_SUCCESS. After two failures the circuit is short circuited (SHORT_CIRCUITED,FALLBACK_SUCCESS) - the result is that the fallback is returned directly. After some time a FAILURE,FALLBACK_SUCCESS occurs again. The circuit breaker decides it is time to test if the service is back up. Since it is not (the timeout is still hit), the Command fails again, and the circuit remains short-circuited. Had the retry been a success, the circuit would have been closed and all new calls would have again be forwarded to the backend service.

You now have seen the demo and everything appears to be working magically, including the asynchronous backend calls. Next time we will have a look at how everything works internally!